Haruka invites Yuu to join her in attending a relative’s wedding, which Yuu misinterprets as Haruka asking her to marry her. Although Yuu is disappointed that this is not the case, Haruka becomes touched by the thought of it. On Christmas Eve, Mitsuki joins Haruka and the others in visiting the Christmas lights, noticing that Haruka and Yuu seem to be shying away from each other. After Haruka and Yuu become separated from the others, Haruka reveals she had been shy to look Yuu in the face because of the strong feelings she’s been having, with Yuu replying she had felt the same. 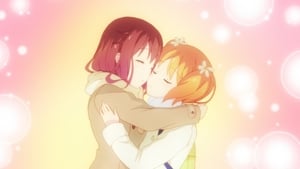