The End of Year Debut of S.B.J.K / Return of the Sour Operation!?

Haruka and Yuu have a lengthy phone call leading up to the New Year, with Mitsuki also getting a brief opportunity to speak with Haruka. As the New Year rolls in, Yuu gives Haruka a kiss over the phone. Later, as Mitsuki becomes jealous of Haruka and Yuu linking arms with each other, she, along with Kaede and Yuzu, follow them to a park, where they almost catch them kissing. When Mitsuki trips up, Haruka manages to catch her, with Mitsuki inadvertently kissing her forehead in the process. Afterwards, Yuzu talks about her experience with learning to ride a scooter whilst Kaede laments the trouble she has with her siblings. 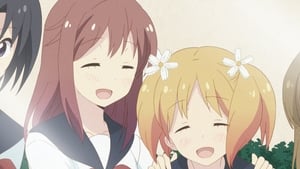