Wrath of the Krampus

A teenager vandalising a neighborhood is attacked by a creature calling itself “Krampus,” leaving his hair snow-white with fear. Three more kids are attacked as the gang meets Mayor Nettles and Sheriff Stone at the roller rink and arcade. Realizing that Krampus attacks “bad kids” such as the aforementioned teenager, the gang turn to the imprisoned Mary-Ann Gleardon for help only to have Krampus attack and kidnap her from prison. In the end, it’s revealed that the gang had enrolled the forces of Hot Dog Water, Jason Wyatt, Mary-Ann Gleardon, Ex-Mayor Fred Jones Sr., and Charlie the Robot (from the Haunted Museum exhibition) in an elaborate scheme to steal the original Mystery Incorporated’s pieces of the Planispheric Disk. After the gang reassembles the disk, the eyes of the Crystal Coffin glow and it mutters “Nibiru.” 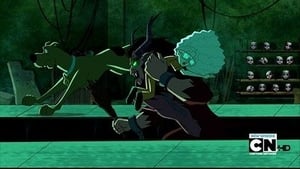