Five years ago, a gigantic dragon robot attacks the Quest Industries, then promptly vanishes, leaving the security guard’s dog unconscious; Dr. Benton Quest works to revive the dog. In the present day, the same robot attacks the gang at city hall as they begin their investigation into the purpose of the Planispheric Disk; however, the gang is saved by Blue Falcon and Dynomutt, who explain that they have been tracking the robot for years. Velma rudely tells the heroes that Crystal Cove is their turf, and Blue Falcon offers the gang to tag along. Together, they find that Quest Industries has been sold to Destroido. Upon investigation, the dragon-robot attacks, intending to kidnap Dynomutt, only to make off with Scooby-Doo instead. Using a tracking device located on Falcon’s belt, the gang and Dynomutt are able to locate Dr. Zin’s lair and save their friends. 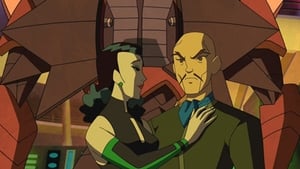