The Crystal Cove Haunted Historical Society performs reenactments of Crystal Cove history every year. During a rehearsal for this year’s production, a Phantom Mummy resembling one of the props scares off the cast and crew members. Vincent Van Ghoul, called upon to take over production, finds the set destroyed and calls in Mystery Incorporated, who become the new cast and crew for the play. Meanwhile, Professor Pericles recruits Brad and Judy to steal the Planispheric Disk back from the gang. 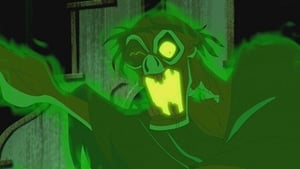