Dark Night of the Hunters

The gang, accompanied by Velma’s mom, goes to Yucatán in an attempt to search for the Heart of the Jaguar after Angie’s old friend, Professor Enrique Andelusossa, is “consumed by the jungle” near the Temple of the Hunters (the burial site of the Hunters of Secrets where the Heart of the Jaguar is kept). Upon arriving in Yucatán, the gang visits Professor Enrique’s antique shop, where they are greeted by his angry wife, who says Mrs. Dinkley is to blame for his disappearance. After hours, the gang returns to the store, only to be attacked by the Mayan Priestess who warns them away from the temple. The gang ignores her threat and travels into the jungle to find the temple. Due to Fred’s master trap skills, Mystery Incorporated overcomes the temple’s diabolical traps and discovers the Heart of the Jaguar in the tomb. The Priestess attacks, but fails and is captured by the traps in the temple, which she triggered. Afterwards, a woman who had been spying on the gang appears, but is revealed as working with Mayor Nettles. 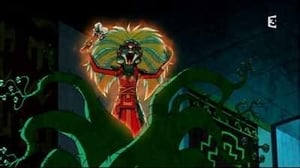