Once the gang returns to Crystal Cove, they find out that everyone in town has disappeared below ground. Later that day, after witnessing Mayor Nettles and Sheriff Stone vanish, the gang goes to Fred’s house to discuss the Planispheric Disc, Nibiru, the cursed treasure, and an upcoming planetary alignment. After the interruption of Kriegstaffelbots, the gang sets off beneath Crystal Cove, and discovers everyone in town working for Professor Pericles and the rest of the original Mystery Incorporated. After hearing a conversation between the old Mystery, Inc., the gang is convinced they have gone crazy, and devise a tactical plan to bust everyone out and shut down the operation. Shaggy and Scooby go undercover as Kriegstaffelbots, while Fred and the girls attack in a suited-up Mystery Machine. After the word is spread, Sheriff Stone has everyone rebel against the Kriegstaffelbots and go on a riot. 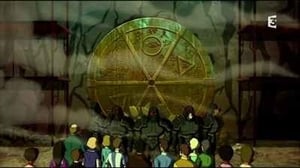