As the gang follows the original Mystery, Inc. through the caverns, they all approach the first gate to the cursed treasure. Professor Pericles knows the gang has been following them, as he calls them out to bring the Keys in order to open the gates. The gang realizes that the Keys and their scenarios seen in the dream world is how they all apply to the gates and the gates being opened. The gang decides to cooperate, after Pericles reveals that they have Hot Dog Water, and opens the first gate. Thanks to Hot Dog Water, the gang enters the first gate; however, Hot Dog Water is killed by the Kriegstaffelbots nearly straight afterwards. The gang arrives at the second gate, and opens it using the mortar bowl. They enter a mysterious rock dimension, where they are greeted and chased by a Rock Monster. After the monster’s failure, the gang comes before the third gate, which is opened using the conquistador’s helmet. The gate then releases water trapped behind and turns into a boat, allowing Scooby and the gang to escape and become stranded at sea. After learning that the next gate is below the water, the gang comes upon the final gate, which is opened using the flintlock. The gang enters the dimension, which is teeming with lava, and come upon the crystal sarcophagus and cursed treasure, realizing that they are beneath Crystal Cove. The Evil Entity sealed within tries to manipulate the gang into opening the sarcophagus to free it, but the gang realizes the words the being is speaking aren’t true. Suddenly, Pericles and the original Mystery Incorporated arrive and Pericles opens the sarcophagus, releasing the Evil Entity. 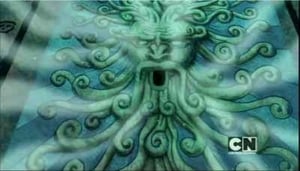