That Vow Is Illicit

As Ruko, Yuzuki, and Hitoe decide to enter a WIXOSS party, Midoriko tells Hitoe that she should get rid of her in case something happens to her, but Hitoe refuses, as she considers Midoriko her friend too. Meanwhile, Ruko continues to be troubled by Iona’s words. The next day, as Hitoe waits for the others, she is forced into a battle by a strong opponent. When Ruko and Yuzuki find Hitoe, they discover that she not only doesn’t recognize them, but also receives pain from Ruko’s touch. It is here that Hanayo reveals to Ruko and Yuzuki that Selectors who lose three times not only lose the chance to have their wish granted, but their wish becomes tainted, resulting in a curse opposite to that wish becoming inflicted upon them. In Hitoe’s case, as her wish was to make friends, she has permanently lost the ability to make any friends, along with her memories of being a Selector. As Yuzuki feels angered towards Hanayo for keeping this a secret from her, Ruko is approached by Akira, who explains how she witnessed what happened to a losing Selector after she was defeated by Iona. Angered by Akari’s insults towards Hitoe, Ruko agrees to battle against her. 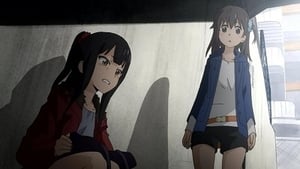