That Truth Is Cruel

As rumors about Yuzuki and Kazuki spreads around school, Yuzuki straight up tells Kazuki that she has always loved him, revealing her wish was to become his girlfriend. Unable to take all of this in, Kazuki runs away from school. Meanwhile, Ruko is approached by Hitoe, who has once again become a Selector, and discovers that the real Yuzuki has become her LRIG. As Ruko reluctantly agrees to battle against Hitoe, Yuzuki explains the cruel truth behind the Selector battles. When a Selector becomes an Eternal Girl, their LRIG takes over their body and receives their wish instead, whilst the Selector themselves becomes an LRIG. As such, Yuzuki ended up as an LRIG whilst Hanayo took over her body, receiving Kazuki’s feelings as he confesses back to her. 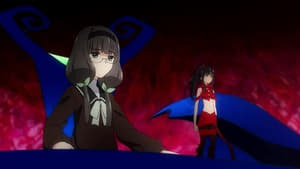