Dr. Ozaki holds a meeting with the staff at the clinic and announces his belief that an epidemic of unknown origin is present in the town and his killed 19 people. He asks them to be vigilant in looking for people exhibiting the known symptoms but not to tell anyone in fear of starting a mass panic. Natsuno continues to have dreams about Megumi staring at him through his bedroom window. The dreams become so disturbing for him that he has trouble sleeping and ask to spend the night at his friend Tooru’s house. That night Natsuno has the most vivid dream yet, that Megumi is now in the room with him. 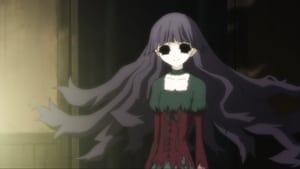