While on an errand to get Miou’s gun fixed, she visits a decal shop to get her phone decorated, but due to some misunderstanding from the cashier accidentally gets Mio’s gun decorated instead. Later, Momoka learns how to walk in high heels from Lemon in order to impress a rich old man and get a cash reward. Afterwards, Miou brings in a high quality crab, who becomes determined not to become dinner, prompting a battle between the survival game club and Platy, who tries to protect the crab. 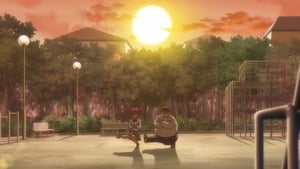