When Momoka appears to have caught an unknown virus, the others vow to protect her from becoming a medical test subject, coming up against the National Survival Game Club. After an intense battle filled with many sacrifices, Momoka prepares to give herself up, only to learn they have found a simple cure. Later, at Christmas, the group attempts to plan a surprise birthday party for Urara, whose birthday is on Christmas Day, but nothing seems to go according to plan. 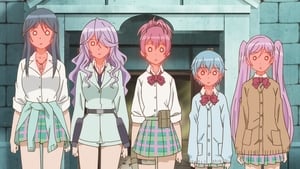