She's Coming! The Woman Who Summons Storms Appears!! / She's Coming, Too! The Challenge of Hell's Children!!

Momoka meets the Survival Game Club’s advisor, Sakura, who often finds herself in a string of unfortunate incidents. Sakura tasks the club with removing a hornet’s nest, with proves more dangerous than expected due to Sakura’s involvement. Later, Momoka faces up against the Chino Elementary School Survival Game Club after their representative, Roselia Haguro, insults her, finding Roselia to be a tougher opponent than she thought. Miou soon shows up and changes the rules, with the winner decided by whoever can retrieve the club mascot, Platy, from a crow. 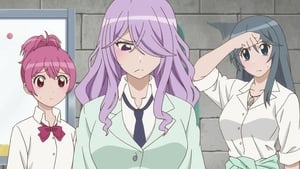