Student Council President Yayoi Isurugi, fed up with Miou making a fool of her at club meetings, attempts to destroy the Survival Game Club by swaying over its members to her side, but doesn’t have much success. She then attempts to defeat Miou herself by constantly serving her food she doesn’t like, though this only leads to some dubious rumors. Later, Sakura brings an executive chair to the clubroom, prompting the club members, who had just watched a yakuza movie, to compete over who gets to sit in it. 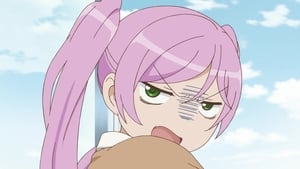