The Legend of the Legendary Heroes: Season 1 Episode 1

This episode follows the story of Ryner Lute, a lazy, sleepy student from Roland Empire Magician’s Academy. While Ryner is searching for relics of the so-called ‘legendary heroes’, he is confronted with soldiers from the Nelpha Empire, who use Nelphan magic in an attempt to kill Ryner, thinking he is a spy. But Ryner, using his Alpha Stigma, an ability in which he uses his eyes to analyse forms of magic, copies their magic, and counterattacks. Not wanting the enemy to learn and copy any secrets of their own magic, the Nelphan soldiers stop attacking. Suddenly, Ferris Eris, a young, beautiful girl from the Swords-Clan comes to Ryner’s aid. Though she was too late to stop the attack, she begins to explain to the Nelphans that Ryner couldn’t possibly be a spy. While Ryner was busy arguing with Ferris about “what does it make you, following that fop around”, the Nelphans attack yet again, this time Ferris showing them not to mess with a swordswoman. 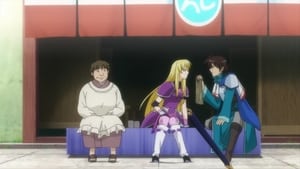