The Legend of the Legendary Heroes: Season 1 Episode 4

When authorities discover Ryner’s power and magical ability he possesses due to the Alpha Stigma, they lock him up in prison, out of fear for their kingdom. After befriending a prison guard, life for Ryner becomes easier. He begins to write a report while in prison, about war, power, struggle, peace and afternoon naps. However, after two years in prison, his execution is decided. The prison guard opens Ryner’s cell and leads him to the prison gates. There, he meets Ferris, whom he hasn’t seen for over two years, and has forgotten. She however remembers him, and when she tells him her duty is to help him escape, he believes it is a trick, and attacks her. He is soon shown not to mess with her, and continues on towards the Roland Kingdom Palace. He discovers that much has occurred during the past two years, and since his imprisonment, Sion has become King. 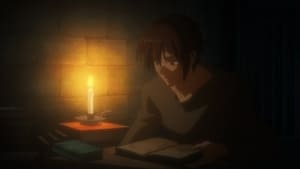