Even if You Were to Die

Golgius appears and attempts to take Elizabeth and Meliodas’ sword back to Liones. Whilst attempting to take the sword, Meliodas awakens, with no effect of the poison showing, proceeding to blast an aura that causes Golgius to make a hasty retreat. Meliodas and Elizabeth set off to Baste Dungeon afterwards, however, they are stopped by a confused Diane, who after hearing the sound of a bell, attacks the group. They try to run away from the berserk Diane, involving a pair of shepherds along the way, however Meliodas soon succumbs to the same bell, and begins to fight Diane. Meanwhile in Baste Dungeon, Ban is shown wandering around after having dealt with Jericho. It is not long before he is found by Jude of the Weird Fangs, who promptly stabs Ban in the chest. 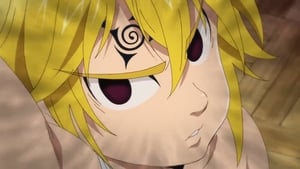