The 17 contestants see the plane and all of the accommodations. They then compete in a challenge where they have to navigate around a pyramid to reach the finish line. They can choose to either climb on top of the pyramid, or go under the pyramid (a majority of the cast chose the latter). Duncan quits mainly due to refusing to sing and having to listen to Gwen and Courtney argue the whole way up the pyramid. Three teams are made (names chosen by the teams themselves) according to who finished the challenge first. They are also given a reward. DJ, LeShawna, Harold, Lindsay, and Bridgette are on Team Victory and are given a stick. Owen, Alejandro, Noah, Sierra, and Tyler are on Team Chris is Really Really Really Really Hot, and are given a goat. Courtney, Heather, Izzy, Cody, and Gwen are on Team Amazon and are given a camel. Ezekiel is the last to finish the race, but is not eliminated because of Duncan quitting, so Chris places him on Team Victory. 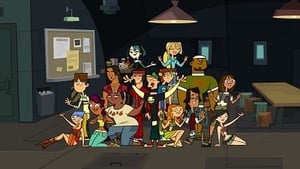