The remaining contestants are forced to compete in a camel race to the Nile, bringing their rewards to the finish line. Chris tells them that each reward has a “special surprise” (the stick being a divining rod, the camel being a camel, and the goat being small). Izzy and Sierra switch teams because of Sierra’s interest in Cody and Izzy’s interest in Owen. Chris catches Duncan humming the song from the previous episode while lounging in the plane, but Duncan denies it. Alejandro tries to win everybody over with compliments and remarks, but Heather doesn’t buy it, though she admits he’s a good manipulator. In the second challenge, the contestants must weave a basket and row across The Nile to the finish line. Ezekiel is eliminated due to accidentally feeding the team’s reward to a crocodile. Even though he was voted off, he holds onto one of the plane’s tail wings, refusing to give up, and hinting a possible return to the game. 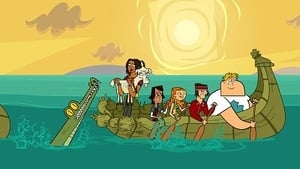