The contestants figure out they are in Japan after Chef slashes the door open and they fall in a giant bowl of rice. The first challenge was a game of giant pinball with each team having a pinball partner (Teams Victory and CRRRRH got a panda and Team Amazon had Cody and Sierra instead), Team Chris is Really Really Really Really Hot won thanks to Alejandro’s care for the panda. The second challenge was writing and producing a Japanese commercial for the brand new Total Drama Yum Yum Happy Go Time Candy Fish Tails. Team CRRRRH chose to do a Japanese monster mash style commercial, Team Victory chose to do a samurai style commercial, and Team Amazon did a commercial with the leftovers. In the end, Team Amazon won because of Chef’s love for exploding donuts. Overall, Harold quit because the samurai style was his idea. Instead of being pushed out of the plane, he “kills” himself with a toy lightsaber and falls out. 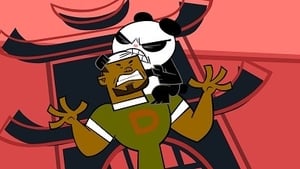