Anything Yukon Do, I Can Do Better

The episode opens up with Team Amazon relaxing in the first-class area of the plane. Cody’s relaxation is interrupted when Sierra starts rubbing his foot and ends up paralyzing him. In the loser area, LeShawna is playing with the num-yos Harold gave her. Chris walks in, and the contestants begin to complain about Japan. The plane begins to land, terrifying Owen. The plane lands in Yukon. Chris explains that the contestants won’t be getting coats, causing them to huddle together for warmth. The first challenge involves team crossing the cassum by jumping from shard to shard. Once at the sleds, the first one there must climb up the mountain while carrying their team on the sled. Team Victory won the first challenge thanks to DJ mysteriously getting there. During the challenge, DJ accidentally got his eyes frozen by crying too much and ended up getting his team lost and hitting a baby seal. Alejandro continues to manipulate the contestants on Team Victory to his pleasure and their elimination, as he starts to flirt with Bridgette, causing her to get distracted. Bridgette starts to kiss Alejandro, but gets tricked and stuck to a pole. Team Chris is Really Really Really Really Hot won thanks to Owen’s weight causing a rapid speed which accelerated the sled. In the end, Bridgette got eliminated for kissing a pole and not crossing the finish line with her team. Before being eliminated, she tries to warn her teammates about Alejandro being evil, but gets pushed off the plane. 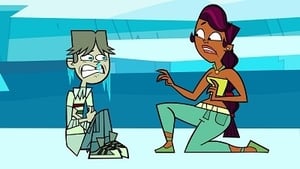