The episode starts off with Team Chris is Really Really Really Really Hot relaxing in the winners cabin. Team Amazon’s female members (except for Sierra) complain about the loosers section. Heather tries to manipulate Sierra and Cody into obeying her, which fails to work, as they both know of Heather’s villainous personality. Alejandro continues to manipulate Team Victory by smuggling them food and trying to win them over. The contestants figure out their in New York after falling in a boat and landing on water. The first challenge involves the contestants climbing to the top of the Statue of Liberty getting the baby carriges on top of Lady Liberty’s crown, then racing down to the boats, and finally driving to Central Park. The contestants figure out the ropes are made of wool when trying to climb them. Alejandro manipulates Sierra into revealing humiliating things about Chris’s past, such as him having his own cooking show that got cancelled after one episode, making terrible movies about talking cats, and being a boyband. Eventually, Chris has enough of Sierra and tells her to zip it. Team Amazon wins the first part, later discovering the only way to go down is to slide down a fireman’s pole. During the second part, the contestants race to Central Park, New York going through a sewer and end up being chased by a giant alligator who tries to eat them. Team Victory won the second part giving them the shortest path. The second challenge involved the teams pushing their carriges along a pre-deterimied path to turtle pond and bobbing for giant apples with only their heads and loading the carriges. Afterwards, teams have to race to the heart of New York. During the challenge, one member of each team had to stay in the carrige (Cody, Lindsy, and Noah) and sing during while racing. DJ this time hurts a turtle. During the challenge, Heather switches Team CRRRH’s carriage with a real carriage. They got to the heart first but lost because of Heather. In the end Team Amazon won once again. The prizes were candy (which Cody greedily started taking), apples (which Sierra wanted to thank Chris for), and an electric meat grinder (which Heather threw out of the plane). 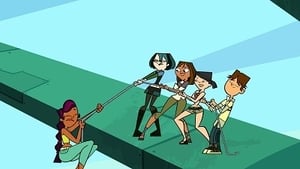