The episode stars off with Teams Victory and CiRRRRH in the losers cabin, to their dismay a hole opens up and begins to suck up everything. Team Amazon (except for Cody) is relaxing in the winners cabin. Cody tries to protect himself from Sierra by hanging string with bells tied but it ends up not working. The contestants discover that they’re in the German Alps when they see them from the window and Chris begins to speak German. After falling from the plane, Chris tells them that they have to sing softly or risk a ‘song-alanche.’ Tyler causes an avalanche after being overjoyed that Lindsy finally remembers him. Also Alejandro continues his tactics by distracting and flirting with LeShawna. When they make it up the hill, their challenge awaits: grind meat into a giant sausage, and then ride the sausage down to the bottom of a deadly hill. Team Amazon yells and gets mad at Heather for tossing out their electric meat grinder reward – they could have used it here and won for sure! Team Victory makes a great big sausage, and Team Chris Is Really Really Really Really Hot is forced to make Owen their sausage after he eats all the meat, while Team Amazon is forced to turn their sausage into a snowboard after Sierra uses most of their meat to make a “meat Cody”. During the first challenge’s second part ravage goats try to attack the contestants. Team Chris is Really Really Really Really Hot won. The rewards were hats(Metal, Fur, and Regular). At the bottom of the hill teams get their second challenge – a dance competition that turns violent when they start slapping each other off the platform! Each team had to have 2-3 dancers per team ( LeShawna & DJ, Sierra, Cody & Heather, Al, Owen, and Noah) The coordinator was Chef to the contestants’ dismay. The challenge begun when it became a survival of the fittest. Team Amazon won when Alejandro gave up. In the end, LeShawna was eliminated and thrown off by Alejandro. 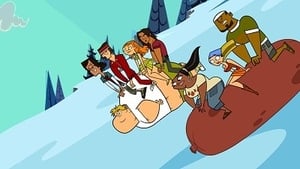