The episode begins with Team Chris Is Really Really Really Really Hot in the economy class section. Owen begins to drool in his sleep and blabber about airplanes. Alejandro commands him to stay quiet, but Owen wakes up in a frenzy and accidentally punches Alejandro in the face, giving him a swollen right eye. Alejandro then complains that Team Chris Is Really Really Really Really Hot needs to be in the first-class section after that day’s challenge. Meanwhile, Team Victory, now down to just DJ and Lindsay, is on the opposite side of the economy class section. DJ suddenly regrets voting off LeShawna, and remembers his curse. Team Amazon, in first-class for the fourth time, enjoys their relaxation. Sierra begins to “surf the Net”, however, she was staring into a drawing of her and Cody on a pizza box while using a real mouse as an actual computer mouse. The three teams exit the plane as Chris welcomes them to Peru; home of the Amazon River. He explains that the challenge is to hike along an ancient Peruvian trail all the way to Machu Picchu. Chris then gives each team walkie-talkies, in case of an emergency. The hiking trip begins, and Team Victory chooses the left path. Tyler gets Team Chris Is Really Really Really Really Hot to also choose the left path in order to stay with Lindsay. Team Amazon ends up taking the right path. Team Victory reaches the zipline first, and they get the privilege of using the T-Bar. DJ ziplines down, while Lindsay rides on his shoulders. Meanwhile, Team Amazon hikes down a trail, Cody thanks Gwen for taking his epipen, but Gwen confesses that she has no idea how to use it. Cody leers at her and explains that she has to jab it into his naked butt cheek, and Gwen tosses the epipen back to him in disgust. Suddenly, Cody is grabbed by an enormous mosquito, but Sierra knocks it down with a stone. She catches him as he falls and assures him of her devotion towards his safety. Team Amazon is stopped in their tracks as they notice two Zing-Zings sitting around a fire. Meanwhile, Team Chris Is Really Really Really Really Hot still needs Tyler, Noah, and Izzy to cross the zipline. Tyler removes his pants and uses it as a makeshift T-Bar. It works for a short while, but it then catches on fire, and he falls into the water. The Zing-Zings have tied Team Amazon to a tree, and Cody suggests that the batteries in the flashlight in his back right pocket could be used inside the walkie-talkie. However, he cannot reach it. This time, DJ slaps innocent monkeys who only want their bananas back. Team Victory reaches Machu Picchu first, and Chris, once again, announces that they are maintaining the first place slot. He worries about DJ’s condition, who is bawling over having hurt his seventh animal’s. Team Amazon, still in the same place as the previous day, is wide awake except for Gwen, who is sound asleep due to Cody’s epipen. Heather is confused for a goddes. In the end, Team Amazon faces elimination until Chris then reveals that the elimination was fake and Heather wouldn’t be taking the Drop Of Shame after voting Heather off. 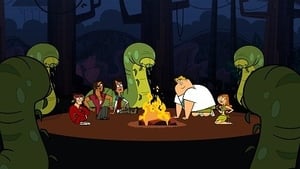