For centuries a treaty has existed between the human world and the realm of the demons.Apr. 19, 1987Japan82 Min.Unrated
Your rating: 0
0 0 votes
AnimationFantasyHorrorThriller
what going on?

This animated Japanese film is a dark thriller adult. A treaty of peace between the Earth and the Black World, a parallel universe of spider-like aliens is coming to an end. Two cops, Taki, a human male, and Maki, a female alien, are assigned to protect a diplomat who will help secure another treaty. A radical group of aliens from the Black World are out to assassinate the diplomat and prevent the treaty; only the bond that develops between the two cops who can save the Earth from destruction. Sex is strongly associated with violence in many graphic scenes; although this is intended to play a symbolic role, this theme is used in excessive way. The story is effective, but the film is definitely not for children or anyone easily offended. 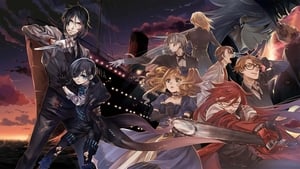